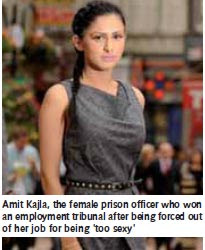 Women are a common feature within our prisons these days, whether they be 'screwesses' or otherwise. I myself have a vested interest in this daring breed of women - not only am I a prisoner but no fewer than two of my sisters fulfil this role within two Male Category B prisons in the North-West of England.

My concern is that these women are putting themselves, their colleagues and the security of prisoners at risk every day just by turning up to work. In the old days the only women appearing within our prisons wore Habits or were hidden away and typed letters for the Prison Governor. However since the late 70s and early 80s, the introduction of Sex Discrimination and Equal Opportunity laws means that women officers are now quite a common sight. Yet does their presence benefit either the prisoner or the prison service? I think not… and why not?

First, there is an age concern. It is shocking to think that you now only need be eighteen and a half years-old to join the prison service. Exactly what kind of life experience can be built in eighteen and a half short years? Exactly how mature can you be when dealing with prisoners and stressful situations on a daily basis? Just recently, a female Brixton officer was jailed for smuggling in drugs and mobile phones for a prisoner who, she says, 'loved her'. Hello, but how gullible can you be?

This example leads me to a further very important point about females of this age range - they are at their most biologically/sexually active and receptive. Perhaps this is not a good point within the female’s life to be working in a male prison surrounded by often highly-sexed and virile young male prisoners?

A couple of months ago we read about Amit Kajla, the female prison officer who won an employment tribunal after being forced out of her job for being 'too sexy' and putting a ‘strain’ on the prison’s security. Like a lot of young women, Amit did not appreciate what was wrong with her wearing short skirts, make-up, jewellery and perfume. This may be totally acceptable ‘on the out’, but it certainly isn't in a prison. As might be expected, certain sex-starved and hormone-crazy lads took advantage of the young miss; whose bullying colleagues may have inadvertently done her a favour in removing her from a future harmful situation. Not that one should ever condone the intimidation of another person. Unfortunately, I fear that this is exactly the type of situation that will become more and more commonplace as young females, struggling to find well-paid yet mentally unchallenging employment elsewhere, join the prison service.

Second, there is a size concern. Again, there was a time when you had to be 70 inches tall to join the prison service (67 for females). But anti-discrimination laws removed height restrictions. Of course, I realise that some women have a calming effect on men, but in prison every second conviction seems to have come about because of 'some stupid cow' (not my words). So perhaps it is best to remove the female element away from some of these often highly-emotional and angry men?

The common perception, as far as I can tell, is that they view women officers with suspicion or outright dislike. During gym or association, I often hear fellow prisoners complaining about some 'prick-tease' or 'nasty bitch'. True, modern prison is aimed at rehabilitation and risk reduction, and there is no better way of measuring these two factors than having a wife-beating prisoner having to take orders from a 5 foot tall 20 year-old. Yet only recently a Category ‘A’ prisoner was arrested for using a female officer’s head as a trampoline. Although she will be fine physically, if not mentally, one wonders if it is worth taking the risk? It isn't rocket science to realise that perhaps we need to roll back to the days when you had to be a 6 foot moron with a beer-gut and a brain the size of an amoeba to be a prison officer in a male prison. The levels of pent-up testosterone that fester within the very walls of our prisons means that a riot could result from even the smallest of arguments, as seen fairly recently at HMP Ashwell, where £100 million of damage was caused because one prisoner did not want to return to his cell. Also, I would like to see control & restraint being performed by a female the size of Amit Kajla on someone the size of Charlie Bronson!

Finally, although this may seem selfish, like any other red-blooded male I do not appreciate being unable to access pornographic material of a more explicit type. I am an adult male in an adult only prison, yet I am not allowed access to certain magazines and DVDs because 'it may upset female staff'. Well I am sorry, but any woman working in a male prison where toilets are often next to the door surely knows what to expect and should be able to 'turn a blind eye'. I have no problem with not having explicit images on my walls, but surely there is no reason why I cannot safely deposit pornographic materials and films away in my locker until after lock-up?

We are no longer even allowed access to 18+ computer games because they may warp our tiny prisoner minds. I wonder how long it will be until we can no longer be trusted to watch TV after the 9pm watershed should we immediately become rampaging animals.
Put simply, why does the government insist on putting security at risk? Is it not about time that common sense, all too rare in our prison system, came to the fore through the removal of women from male prisons - and males from female prisons? Remove these females please - it isn't clever, it isn't harmless, and it can definitely lead to big trouble in little cells!

* Craig Topping is currently resident at HMP Blundeston
Posted by jailhouselawyer at 11:37 AM