A little jailbird contacted me from inside to inform me "that the gov has ordered the removal of the latest issue, [of Inside Time - The National Newspaper for Prisoners,] due to the "angry andy" column on p31".

I phoned John Roberts, Operations Director and Company Secretary at Inside Time, and he confirmed that all 50,000 copies have been removed from prisoners throughout the penal estate because of a complaint received from the Iman as it was believed it would offend Muslim prisoners. Mr Roberts added that plans are under way to republish and redistribute the June issue without the "offending" satirical article.

I do possess a hard copy of the June edition of Inside Time, and whilst this article has already been removed from the Inside Time website a Google search has cached the following. 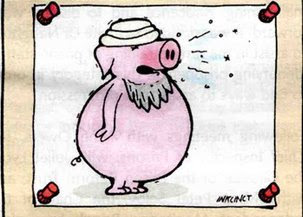 Pig Flu? My arse! All this ooh ahh about rogue-gene-piggypox-bacteria-swine-bollocks is nothing more than a Government conspiracy to blag us all from finding out the truth about how this contagious virus actually came into being. Who does that bloody Gordon Brown think he's kidding? Certainly not me! You see, I know the real origin of this so-called pig flu. Oh yes; there's no two ways about it: it came into fruition from a botched, Muslim-led act of terrorism. All part of Osama Bin Laden's global ‘war on pork’.

C'mon, it's common knowledge to all and sundry that not only do the bloody Taliban have a grudge about everything except facial hair, but in particular they can be seen as being extremely prejudiced against the West's vast population of porkers. So, to try and get in Allah's good books, Bin Laden created his own 'halal flu virus' with the intention of eradicating every pig in Christendom, and by doing so piss off all Westerners by denying us our daily bacon.

Initially, Bin Laden's war on pork was targeted to disrupt and inconvenience the Americans the most, because Osama and his boys are fully aware that the yanks are a nation of clinically obese lard arses who can't function properly without their McRibs, hog roasts and occasional wild boar shoot. C'mon, can you imagine McDonalds without any bloody pork? It would be akin to Jodie Marsh without tits – nobody would want to go there!

Yes, not too long ago in a cave somewhere in deepest Afghanistan, our bearded foe created his halal flu virus to totally wipe out the pigs of the Western world, and hopefully see the end of pork as we know it. Only trouble was, the young terrorist Bin Laden hand-picked to fly across the Atlantic to carry out the wicked deed was not only a goat short of a full flock, he'd also never ventured out of his village before. So, with geography not being one of his strong points, coupled with his poor command of the English language, it's not surprising that he got off the plane one stop early thinking he was in Kansas, America when really he was in Cancun, Mexico. There, he set the Bin Laden flu virus free on a Mexican pig farm instead of on an American one as planned – what a knob!

However, with brave, fairytale-style resilience, our little Mexican snouted amigos thwarted Bin Laden's plan by quickly building up an immunity against his weak, cave-made, halal flu strain and, just like with the big bad wolf , the little swines saw the virus off and came out the winners - not even Al Qaeda could 'blow their house down.' The pigs got their revenge too by completely buggering up Mexico's tourist industry by passing a more complex and stronger strain of Bin Laden flu back onto us humans, a strain which is at present spreading globally, faster than shit off a shiny shovel.

So, thanks to the resilience of our little pink pals, Bin Laden's war on pork backfired. His stupid bloody idea had more cracks in it than London Ladies College. And the irony of it is: the only ones making 'a killing' out of Bin Laden's war on pork are the bloody American owned pharmaceutical companies. Who's a daft bearded bastard then?

So there you have it folks; forget all that bloody conspiracy bollocks in the mainstream media, you heard ‘the truth’ first here in Angry Andy's Column. "May the pork be with you!"

Comment: Apparently, John Roberts received a phone call from Diversity at Wormwood Scrubs in which it was claimed that both the above article and the cartoon which accompanied it might be offensive to Muslim prisoners. This has implications like the Dutch case where a published cartoon caused a rumpus.

The prisoner who wrote the article has been charged with a disciplinary offence against the Prison Rules, and is in the Segreation Unit. He is also being transferred out of Hull Prison.

The Charity which operates Inside Time now has to fork out £15-20,000 to arrange for republishing and redistribution, and who is going to bail them out for this extra cost?

Inspiring story, I got an ex-husband who is now into his 21st year in California... he did not have a bad family (missing dad), but loving mom, but got involved with the wrong crowd. Anyway, he turned himself around in prison, really; unlike many pretenders.

Anyway, not sure if the following is of interest to you, or your readers; but attempting to spread the word.

We got to address the problems at their root, where kids are procreated not from love, and concern and a deep desire for a child.. but as so many millions of children around the world are born into abuse and for sexual, and economic slavery purposes...

So with that said...

To advocate for human rights, peace, and social justice while ignoring their necessary ecological basis --— a stable human population – at, or slightly less than – the eco-systems long term carrying capacity --- is intellectual dishonesty and hypocrisy.

Notice of Legal and Political Request to:

(I) Withdraw Nobel Peace Prize’s from Nelson Mandela, F.W. de Klerk, and Archbishop Desmond Tutu, for (a) Intellectual Dishonesty & Hypocrisy; (b) Moral, Political and Religious Prostitution; and (c) ‘TRC-RSA’ Fraud and Betrayal; and