In full: Statement from Megrahi

In full: Statement from Megrahi

"I am obviously very relieved to be leaving my prison cell at last and returning to Libya, my homeland.

I would like to first of all take the opportunity to extend my gratitude to the many people of Scotland, and elsewhere, who have sent me their good wishes.

I bear no ill will to the people of Scotland; indeed, it is one of my regrets that I have been unable to experience any meaningful aspect of Scottish life, or to see your country.

To the staff in HM Prison Greenock, and before that at HM Prison Barlinnie, I wish to express thanks for the kindness that they were able to show me.

For those who assisted in my medical and nursing care; who tried to make my time here as comfortable as possible, I am of course grateful.

My legal team has worked tirelessly on my behalf; I wish to thank Advocates Margaret Scott QC, Jamie Gilchrist QC, Shelagh McCall and Martin Richardson together with the team at Taylor & Kelly, for all of their gallant efforts in my bid to clear my name.

I know they share, in no small measure, my disappointment about the abandonment of my appeal.

Many people, including the relatives of those who died in, and over, Lockerbie, are, I know, upset that my appeal has come to an end; that nothing more can be done about the circumstances surrounding the Lockerbie bombing.

I share their frustration. I had most to gain and nothing to lose about the whole truth coming out - until my diagnosis of cancer.

To those victims' relatives who can bear to hear me say this: they continue to have my sincere sympathy for the unimaginable loss that they have suffered.

To those who bear me ill will, I do not return that to you.

And, lastly, I must turn to my conviction and imprisonment.

To be incarcerated in a far off land, completely alien to my way of life and culture has been not only been a shock but also a most profound dislocation for me personally and for my whole family.

I have had many burdens to overcome during my incarceration.

I had to sit through a trial which I had been persuaded to attend on the basis that it would have been scrupulously fair.

In my second, most recent, appeal I disputed such a description.

I had to endure a verdict being issued at the conclusion of that trial which is now characterised by my lawyers, and the Scottish Criminal Cases Review Commission, as unreasonable.

To me, and to other right thinking people back at home in Libya, and in the international community, it is nothing short of a disgrace.

As a result of my surrender, and that judgment of the Court, I had to spend over 10 years in prison.

I cannot find words in my language or yours that give proper expression to the desolation I have felt. This horrible ordeal is not ended by my return to Libya.

It may never end for me until I die. Perhaps the only liberation for me will be death.

And I say in the clearest possible terms, which I hope every person in every land will hear: all of this I have had to endure for something that I did not do.

The remaining days of my life are being lived under the shadow of the wrongness of my conviction.

I have been faced with an appalling choice: to risk dying in prison in the hope that my name is cleared posthumously or to return home still carrying the weight of the guilty verdict, which will never now be lifted.

The choice which I made is a matter of sorrow, disappointment and anger, which I fear I will never overcome.

I say goodbye to Scotland and shall not return. My time here has been very unhappy and I do not leave a piece of myself. But to the country's people I offer my gratitude and best wishes".

Comment: I would question that the man getting on board the plane was in fact Abdelbaset Ali al-Megrahi. 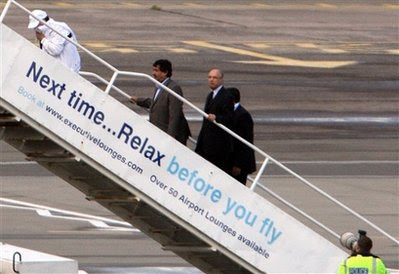 Next time...Relax before you fly

LOL.
Posted by jailhouselawyer at 8:41 PM

Labels: In full: Statement from Megrahi


Thanks John a couple of videos on here after his release.

Ironside: This is the best you will get...

In USA parlance this man would be called a PATSY. A fall guy.... Someone who takes the blame for somebody else.

I, too would have grave concerns about these pictures released. Face covered up? Why? Hmmm.