Taxi for Rocky to doggy heaven

Taxi for Rocky to doggy heaven. 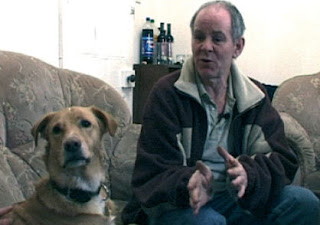 This morning the house feels empty and quiet.

Yesterday morning I came down wondering if I would find Rocky lying dead on the fireside carpet. He had not jumped up on to the bed beside me. Something was wrong. He lay there not giving me any attention. I thought I had better get him down to the PDSA. I went to look for the phone number. When I came back Rocky was stood by the front door. I thought he was going out to be sick. He took a few wobbly steps and then collapsed. My heart sank.

I phoned friend to take us down to the PDSA but he said he was in the middle of a field in Lincolnshire tending the horses and would not be back until lunchtime. He suggsted getting Rocky a blanket. I wrapped a duvet around him.

I phoned the PDSA and said I needed an ambulance. I was told they no longer provided this service. It was suggested I get a taxi. I thought 'where am I going to get the money for a taxi from?'. I did hope that my pension had been paid in early for Christmas. I was told to bring a letter from the Council Tax or Housing Benefit with me. I got irrate with them worrying about a piece of paper when Rocky was in such a state. I did not know where I would find a recent letter after the workmen had moved everything around to get the double glazing installed in my study/bedroom.

I kept popping out to check on Rocky.

A neighbour called with a Christmas card for Rocky and me. He offered to pay for a taxi. I said I would check if my money had come first.

Lunchtime came and I phoned my friend again only to be told he was now at work and that his partner had got the car.

I left Rocky to go to the cash point, and luckily my pension money was available.

Then I had a brain wave where I might find the necessary letter for the PDSA, I found it and got a 3.15pm emergency appointment. I ordered a taxi for 2.45-3pm.

I was not fit enough to pick up Rocky so the Taxi driver suggested we each pick up two corners of the duvet and stretchered Rocky into the taxi.

At the PDSA the surgeon said that Rocky's gums showed that he was anemic and that she suspected internal bleeding and feared it would be cancer. She said they would need to do blood tests and X-Rays. If I did not hear anything by 4.30 to phone back.

Approximately 4.30pm I received the phone call I was dreading. The surgeon said Rocky had lost a lot of blood, and she had difficulty finding the veins. He had a ruptured spleen. She could operate but Rocky may not survive the anasthetc. I said Rocky deserved the chance

During the operation it was discovered that the cancer had spread to Rocky's liver and that removing the spleen would make no difference.

I said to put him to sleep.

Rocky is now in doggy heaven. 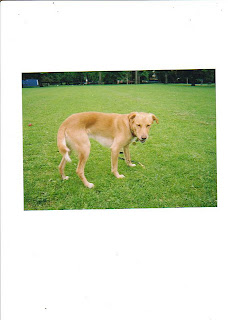 Posted by jailhouselawyer at 12:39 PM

We are with You to care about. You are not alone in net.

It is silent at Your´s home and Your´s heart is bleeding......

You are not alone. We help,e at least we do company. But if you need other help you ask please.

We were talking about Rocky yesterday: he just came into my mind. He was such a lovely dog, and all our dogs liked him. What a sad thing to happen. He was a dog with soul. Our thoughts are with you at this sad time.
I'll miss seeing him in the park.
Kenneth and Marian

Oh John I am so sad to hear of the loss of your lovely dog Rocky. I know how much he meant to you and I imagine that you are missing him terribly. Thinking of you at thissad time, Ann.

Take comfort from knowing that Rocky had a good life.... Because of you!

It sounds like Rocky didn't suffer to much, which is good.

My thoughts are with you.

Dear John,
I am sat hear with tears in my eyes.
I have visited your blog for a long time always longing to hear about Rocky. I liked when you used to post photos of him. I know how much you loved him.

Last Christmas my dog Amber had a tumour in her tongue. The vet discovered it in November, she died in January. I have grieved for her for a long time this year.

I know how sad you are feeling right now. You gave Rocky a good life. I'm glad he had that taxi ride. Take care of yourself. You are not alone on the internet.

Shocked and saddened. I'm one of those who knew Rocky and we got on though he did like licking someone's face. :)

Really shocked. Many thoughts for you, John in this first Christmas without your companion.

" Many thoughts for you, John in this first Christmas without your companion. "