Strike action and and the House of Lords

Strike action and and the House of Lords

As I walked down to the station yesterday morning to catch a train to London to attend a meeting in the House of Lords, there was a large group holding placards with CSU on them, and only one copper in sight, and I saw a friend in the group and asked him “Why aren’t you at work?”. We shook hands and someone gave me a leaflet, I looked at it and told the leafleteer “I don’t believe in unions”. My friend told him, “Don’t believe him! He set up a union for prisoners!”.

As I came out of Westminster tube station, the road in front of the Houses of Parliament was blocked by parked police vans 3 deep, going in both directions as far as the eye can see, and policemen lined both sides of the street. I assumed that they were there to protect the rogues inside Parliament. I noticed a pile of placards with CSU on them lying on the ground, I assume that they had been taken from strikers.

When I arrived in Committee Room 4, there was only one other person in the room. I set up the leaflet in front of the Chairman’s red chair with the gold portcullis on it, and the other person obligingly took a photo of it for me. It was only a small protest or act of defiance, but to do it inside Parliament given the effort the police had gone to to prevent such from happening I think is a small victory.

We talked for a few minutes and decided to go for a smoke. However, upon discovering that we would have to go off the estate and come back through security again we chose not to go out. I pointed out that there are smoke detectors in the corridors, but none in Committee Room 4. He said there are no No Smoking notices. Even if we, a pair of ex-cons, had been caught it hardly constitutes treason! 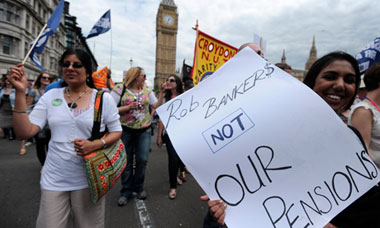 n.b. This post first appeared as a comment on Bob Piper's blog.
Posted by jailhouselawyer at 10:50 AM