From Russia With Love

From Russia With Love 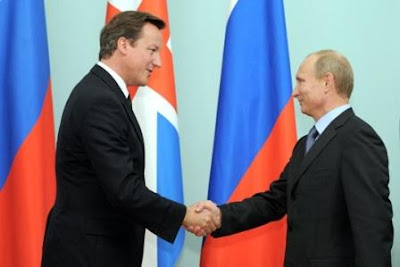 Recently Dominic Raab MP, who's father came to Britain to escape Hitler's regime, observed that Russia has a bad record of non-compliance with ECtHR judgments and suggested that the UK follow Russia's bad example.

Russia and the UK are signatories to the Vienna Convention on the Law of Treaties:

“Noting that the principles of free consent and of good faith and the pacta sunt servanda rule are universally recognized,

Internal law and observance of treaties

A party may not invoke the provisions of its internal law as justification for its failure to perform a treaty. This rule is without prejudice to article 46”.

Both Russia and the UK are signatories of the Treaty of London 1949 (Statute of the Council of Europe):

Every member of the Council of Europe must accept the principles of the rule of law and of the enjoyment by all persons within its jurisdiction of human rights and fundamental freedoms, and collaborate sincerely and effectively in the realisation of the aim of the Council as specified in Chapter I”.

Russia and the UK are both seeking to claim that by invoking the sovereignty principle that they do not have to amend domestic law following an adverse judgment in the ECtHR. Furthermore, the UK claims, via Dominic Raab MP, that the ECtHR has no enforcement powers and it is unlikely that the sanctions of suspension and expulsion would be invoked against the UK. One has to wonder why Dominic Raab MP should be referred to as the honourable in the House of Commons when he advocates that the UK should act dishonourably in relation to our international law obligations? Dominic Raab MP is a international business lawyer who would appear to be out of his depths with international human rights law. He worked at the FCO during the Labour administration when the FCO lost Hirst v UK (No2) before the Chamber and lost the appeal before the Grand Chamber. Later he went to work in Parliament and was Chief of Staff to Dominic Grieve, Shadow Secretary of State for Justice. Recently, in Scoppola v Italy (No3), the Attorney General failed to persuade the Grand Chamber to overturn Hirst No2.

What sort of wimps are Eton and Oxford turning out when the thought of giving prisoners the vote makes David Cameron feel physically ill? The only way he can claim to be the heir to Blair is that both of them have told the HoC that they would not comply with Hirst No2. Observers might note that the Hirst problem has not gone away in almost 8 years. The Hirst test is still standing firm. As David Cameron has gambled his political career upon this issue, an appropriate response would be to raise the ante. His legacy is to be the sick man of Europe.

The 3 objectives of the Council of Europe are Human Rights, Democracy and Rule of Law. If the UK does not want to honour these then it should leave the Council of Europe. If the UK takes this course it follows that the UK cannot remain a Member of the European Union. The United Nations would declare the UK a rogue or pariah State.

Human rights as higher law may be too much for David Cameron to stomach. In the UK it would mean having a written constitution. Russia has a constitution. It would be unconstitutional to pass a law which violated human rights. This approach would mean that sovereignty of the people along with the constitution supplants the doctrine of the Supremacy of Parliament. We need to move on from the days when Parliament declared its supremacy by beheading King Charles the First. Back then the peasants did not have any democracy. Eventually the franchise was extended but democracy stopped outside of the prison gates. In 1989, the democratic revolution started in Hull Prison Special Unit. The aim being to change the policy of there are no votes in prison. Selfish MPs believed that they would lose votes if they argued for prison reforms. The Prison Reform Trust argued that politicians misread public opinion. In any event, the ECtHR in Hirst No2 excluded the element of public opinion. The ECtHR pointed out that its task was to protect human rights and not pander to public opinion. In other words, it was a case of the Individual v the State. The State being Parliament, Executive and Judiciary. All taken hostage just because a convicted prisoner asked the question 'why are there no votes in prison?'.

One answer is because of s.3 of ROPA 1983. Another answer now is because the thought of amending it makes the Prime Minister physically ill. Does the latter accord with the rule of law? Of course it doesn't.

The system expects offenders to reform. One would have thought that reform from a law breaker to a law-maker would be welcomed by the MoJ. Instead, the response was for the law-makers to become law breakers. Not only setting a bad example for prisoners to follow but also inciting Russia to follow suit. The ECtHR has identified that the UK is a failing State. That is, there are systemic failures and structural faults requiring reform. A reading of constitutional and administrative law shows this. Prison case law shows that prisoners tend to establish rights when the Judiciary feels its independence is threatened. Hirst No2 shows that the separation of powers in the UK does not exist. The UK State has no option but to hand over the White Flag of Surrender.
Posted by jailhouselawyer at 1:20 AM