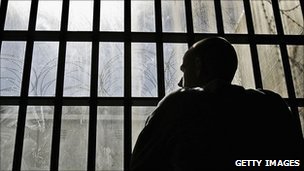 Prisoners have won more than £10 million in compensation over the last five years, figures show.

A total of £10,125,845 was handed to inmates who claimed they suffered harm inside the prison system in the last five financial years.

Two payments to prisoners of more than £100,000 have been made in the last year alone as part of almost £1.6 million in settled claims, figures released to the Press Association under freedom of information laws showed.

Three prisoners were also given £25,000 each for "false imprisonment".A further 280 offenders won payouts of less than £10,000, with many of the smaller claims relating to delays in processing release papers, which can lead to prisoners spending too long behind bars.

A Ministry of Justice spokesman said: "The vast majority of prisoners' compensation claims are relatively trivial, do not merit financial redress, and are dismissed at an early stage.

"All claims are robustly defended, and would only be settled on the basis of strong legal advice, and in order to seek the best value for the taxpayer.

"Compensation would then be determined following judicial guidelines and a full analysis of the available evidence."

One of the largest compensation payments to date was a £2.8 million settlement in 2005/06.

At the time, the Government would not comment on reports that the out-of-court settlement was made to an inmate who required long-term medical care because of self-harm committed in jail.In a separate case, £1.14 million, went to former prisoner Gregg Marston, of Shoeburyness, Essex, who was left crippled when a doctor failed to send him for an urgent examination.

His case, which was settled out of court, centred on his treatment at Chelmsford jail in Essex in February 2000.

He was taken there after failing to appear at court for driving offences committed in breach of the terms of his release from a four-year sentence for burglary.

Marston complained of back pain when he arrived at the jail but was not referred to hospital until the next day.

As part of his legal action, a consultant in spinal injuries told the Prison Service that, if Marston had been referred a day earlier, he might have undergone surgery to save the use of his legs.
Posted by jailhouselawyer at 10:14 AM